Another step brings the Seton Hall-Hackensack Meridian School of Medicine closer to its opening.

The Nutley Planning Board has approved its preliminary site plan for the school.

“The board did a great job in persuading the school to limit the permanent parking spaces on the Nutley side," Mayor Joseph Scarpelli noted in a statement. "Our goal was to provide the parking that was required, while preserving opportunity for future development and added ratables.”

“Passing this resolution was a big step forward to help complete the construction at the medical school and allow students and faculty to begin occupying the buildings in late spring,” the mayor stated.

"We're pretty set on our end," Scarpelli affirmed to NorthJersey.com.

The next step will be amending Nutley's redevelopment agreement with the medical school's partnership to reflect the parking accommodations, followed by final site plan approval, he said.

With the tract marketed as ON3, Prism intends to create a synergy among like-minded businesses geared toward life sciences.

The flagship project is the Seton Hall and Hackensack Meridian partnership, which would be the state's first private medical school in 50 years.

The medical school reflects Phase 1 of the property's redevelopment, but other entities are expected to follow suit.

Modern Meadow decided in August to relocate its headquarters from Brooklyn to Nutley.

The New Jersey Economic Development Authority, through its New Jersey Assistance Program, offered the bio-fabrication firm $32 million in Grow NJ tax credits to bring a laboratory and pilot manufacturing site to ON3.

In November, the EDA approved $5.51 million and $3.3 million in annual sales and use tax exemptions for 10 years to Quest Diagnostics Inc. and Ralph Lauren Corp, respectively, if the firms occupy portions of the pharmaceutical giant's former site along Route 3.

The five-member group includes three former Roche employees, who bring more than 90 years of combined experience at the 116-acre campus in Nutley and Clifton, according to Prism.

“ON3 is a highly complex site from an operational standpoint,” Diaz said in a release. “Beyond the sheer scope of the project’s mixed-use master plan, this campus houses an intricate utility infrastructure, with capability to produce 10-megawatt cogenerated electricity, 15 tons of cooling capacity and 150,000 pounds of steam boiler capacity per hour."

Additionally, ON3’s 1.2 million square feet of existing office and research space contains sophisticated and distinct building systems – with more to come, according to the company.

"Simply put, we needed the best people and strongest leaders on the ground as we move forward with the redevelopment and welcome the first tenants to ON3,” stated Diaz. 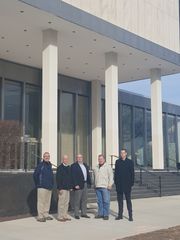 According to Prism, Richard Margerison, Jr., the company's senior property manager, is serving as ON3 team lead.

David Altenau, a 28-year Roche employee, has been named director of operations for ON3.

Tim Keating, property manager for ON3, provides building oversight and heads campus security. Keating spent 31 years at Roche, and is a member of the Nutley Volunteer Emergency and Ambulance Rescue Squad.

Mike Meechan, who joined Roche in 1984, is ON3’s facilities manager in charge of construction management.